I’ve just pulled out of the station in Lourdes and must admit I’m a bit tearful. It was an incredible experience that I’m not likely to ever forget. If you’re new to my blog, welcome! I had problems uploading in Lourdes, so I’ll be starting with yesterday’s adventures first.

I woke up very early to join the queue for the baths, my purpose for coming here. If not familiar with Lourdes, please google. It was a chilly 59 degrees, but you could almost imagine being on a south seas island as I was behind the Pacific Islander group again and they were singing so sweetly. Another lovely tidbit, they were wearing what we would think of as Luau type traditional outfits and garlands of flowers on their heads, as beautiful as their huge smiles. Seated on either side of me (we were lined up on long benches) was a lady from Dublin and a lady from San Francisco. Both had been to Lourdes multiple times and explained everything, which helped my nervousness. They were both very kind. We got in line at about 7 am and my turn came about 9:15. Prayers started around 9 followed by the infirm being taken in shortly thereafter. When called back , you are seated on another bench to wait to be called into the changing area. The first thing I noticed was how warm it was, knowing that the water was going to be like ice. The changing area is shrouded in curtains and I was told there would never be a time that privacy or modesty would be compromised. I was soon called back and the first woman to introduce herself and ask my name warmly said “welcome”. I mention this because the way it was said immediately put me at ease. The area had places for eight people (I don’t know if the men’s side is the same). The lady that helped me held up a very large blue cape like thing (much larger) that fully shrouded me so that I could undress in total privacy despite being surrounded by people. Then, once finished, it was wrapped around to await my turn. When that time came, the curtains in front of the bath were opened and I was ushered in. Inside the area were three people, one at the head next to me and one on either side. One was a very young American nun, who handled communicating and explaining. She was very sweet and I wish I could have thanked her. So, a large piece of Muslim which had been soaked in the waters and wrung out was then wrapped tightly around me (cold), again under the blue cape thing and sort of fastened. The nun and the other lady then took my forearms (for stability) and instructed me to walk down the 2 steps into the water. There was a statue of Our Lady at the opposite end and you were instructed to present your intentions and their signal that you were finished would be the sign of the cross. I stepped down into the (icy) water and walked forward then was told to sit back like you’re sitting in a chair and submerge. They started the Littany of Our Lady of Lourdes. And just like that , it was over. Truly, I don’t remember getting out of the water or the muslin being removed (I understand from others, this is normal). I remember getting dressed and being amazed that I was already dry (no towels, but had been told this would happen). They tell you not to rush, that there is no hurry and they offer to help with your shoes. When done, the lady that had welcomed me came over and said She was a nurse and asked about my cgms and pump. She smiled and said “it is much better for you” meaning my tools make control better. I smiled, said yes, and showed her my reading on my Apple Watch. I think it was 143, from my pump being off while in the bath and being nervous. She smiled again and said “good”. I walked out with a huge smile on my face and I think it stayed there for hours. Below is the picture of the benches where we waited and the doors to the baths. 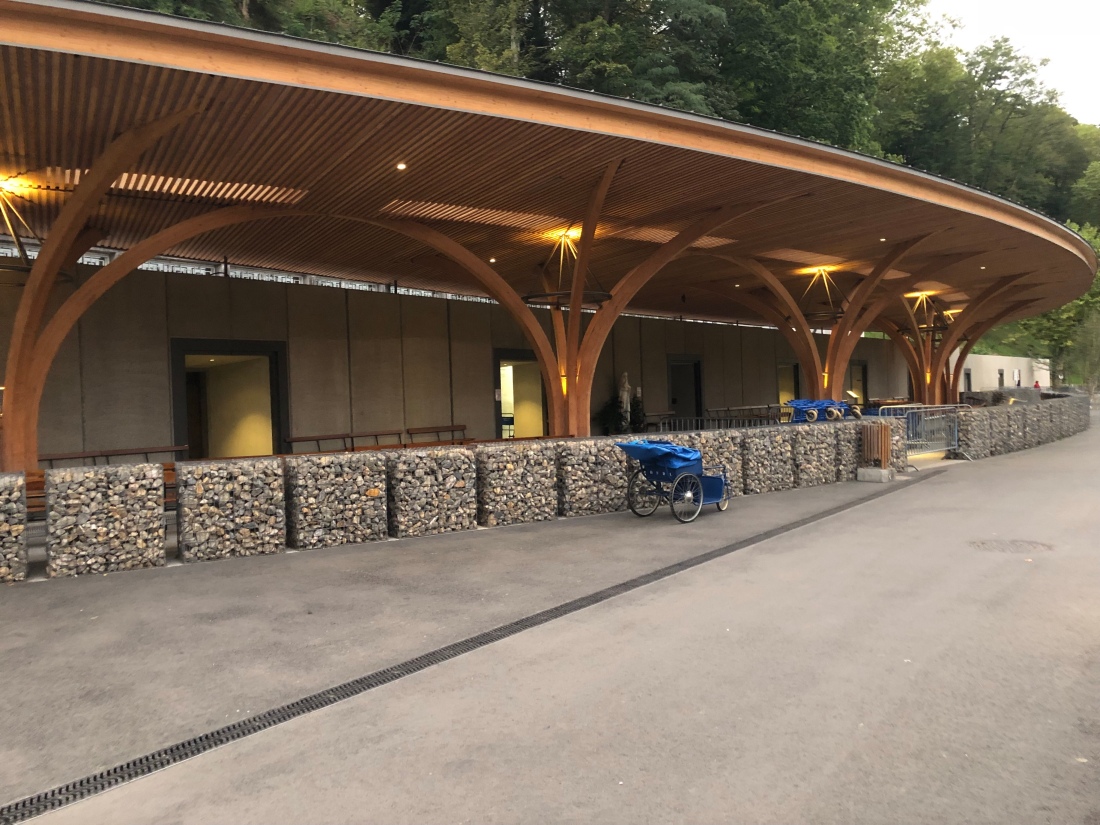 From there, I walked over to the Grotto for a few more moments of prayer. I felt different, really I did. But, if you asked me how, I would be at a loss of what to say. From there, I decided it was time to reach the top of the mountain. And, I decided to walk all the way to the funicular. It was a pleasant walk through town and I took quite a few pictures (to be included in the gallery). The ride up the mountain was incredible and the sights beautiful!! Taking pictures at the summit was fun and I offered to take a group picture for a German family and they reciprocated. I had brought a picnic and do, sat down to enjoy it. This is a good time to say that the Lourdes area is overrun with moths right now and I don’t know if it happens every year, or not. It was more than relaxing up there and I content to just look at the scene. Back down the mountain and then on to the apartment to start packing for the trip to Monaco (and a quick nap). 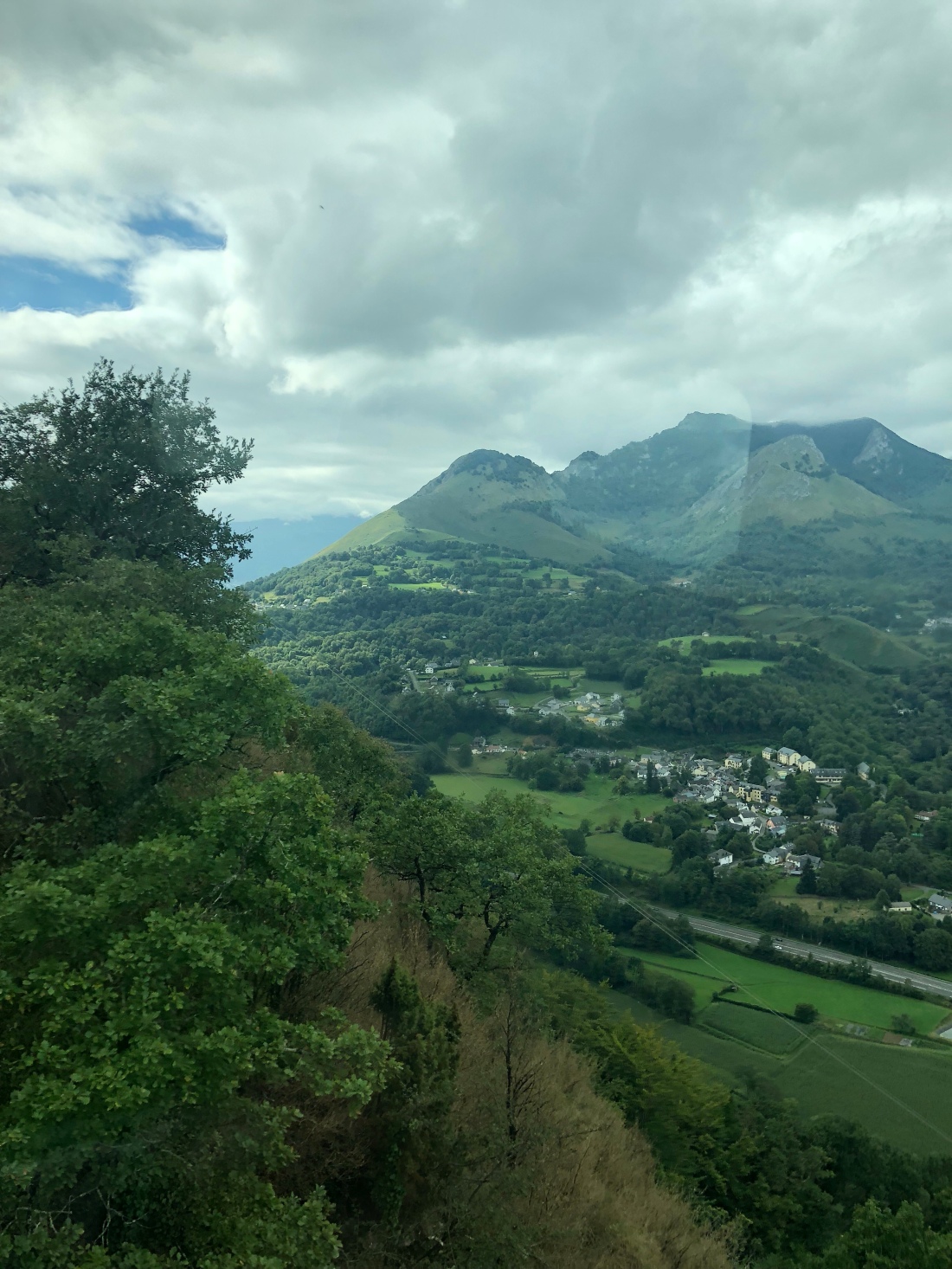 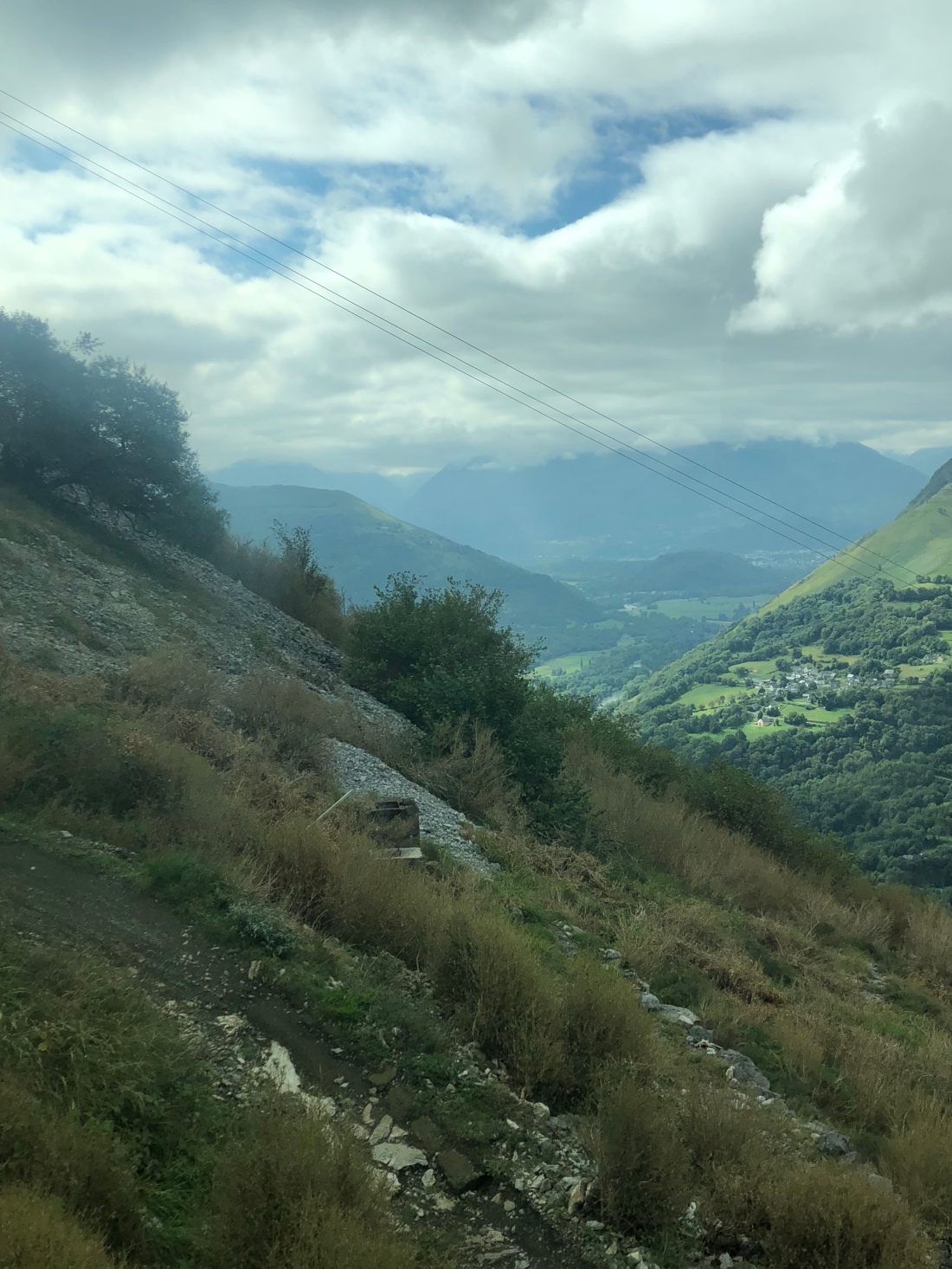 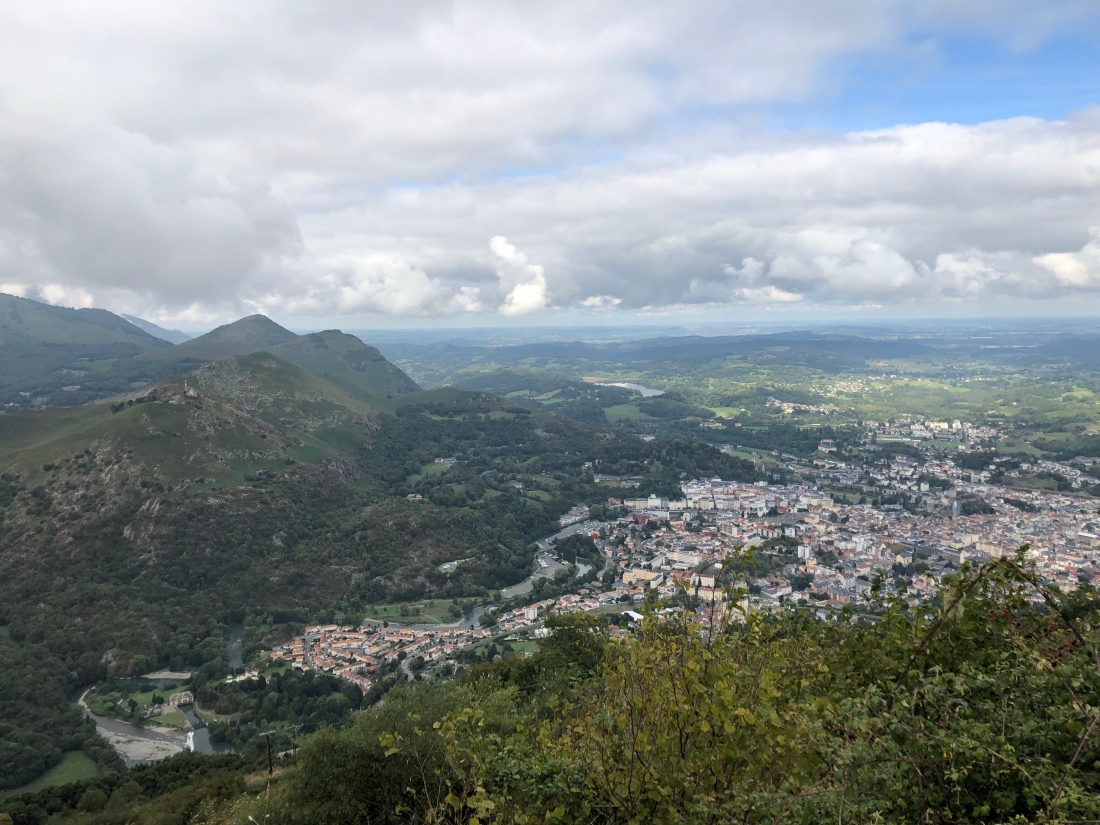 For my last evening in Lourdes I went shopping and then for a nice dinner of roast chicken and mushroom risotto. When dinner was finished, I went back to the Grotto for pictures. Below are pictures of the place where you fill your bottles with the spring water and the grotto and spring. It is tradition to touch the rock face and there are places it is worn smooth.

I wanted to come back for the candlelight procession this night not as a participant, but as a spectator. It was amazing seeing so many people and knowing it’s like this every..single..day. 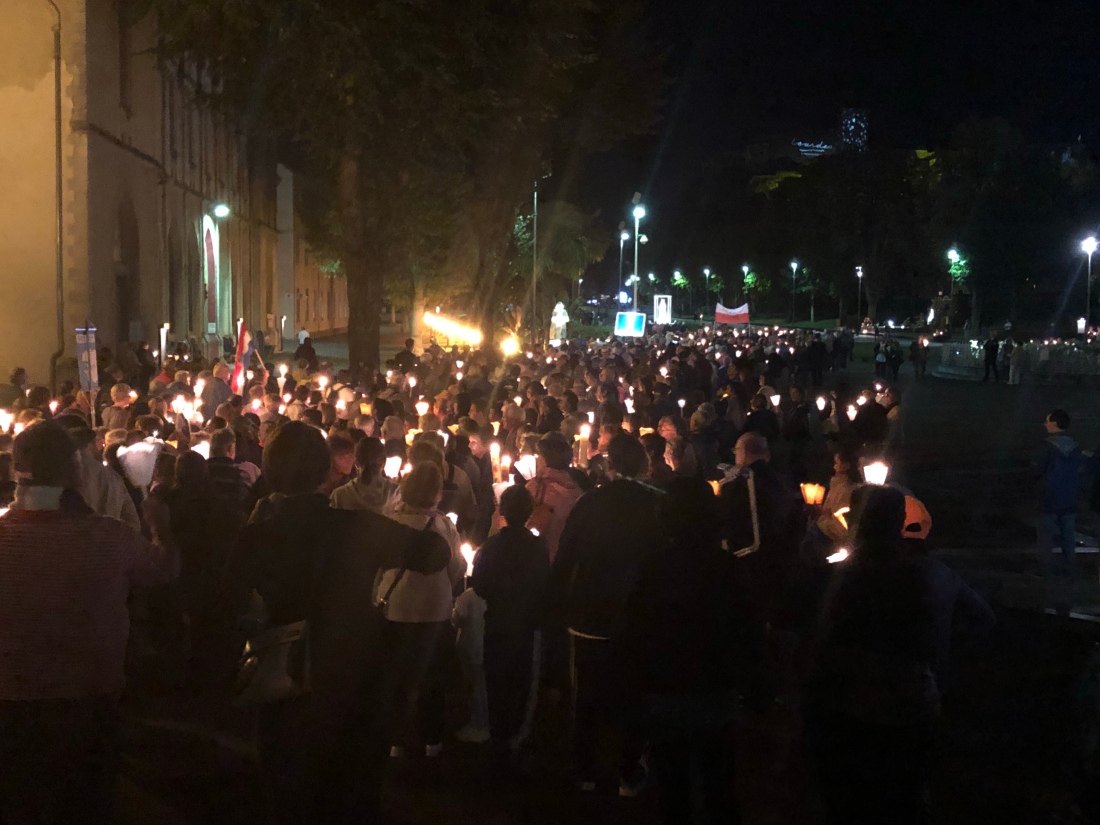 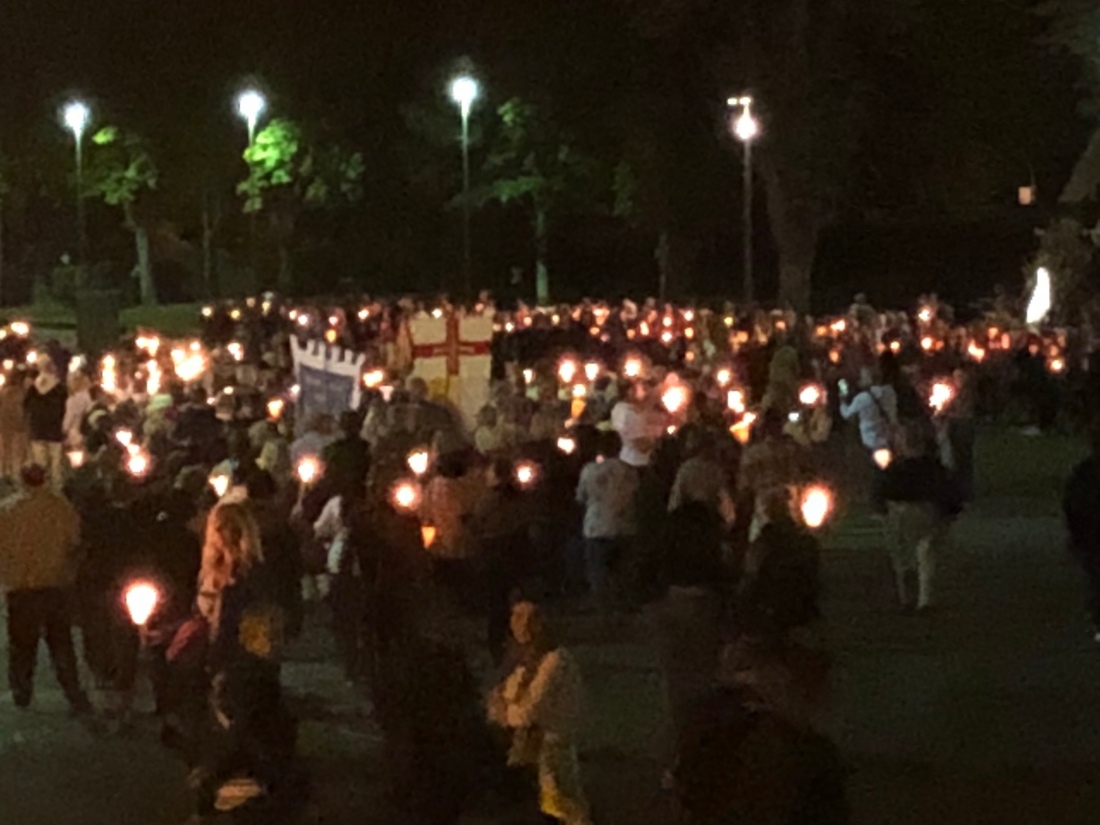 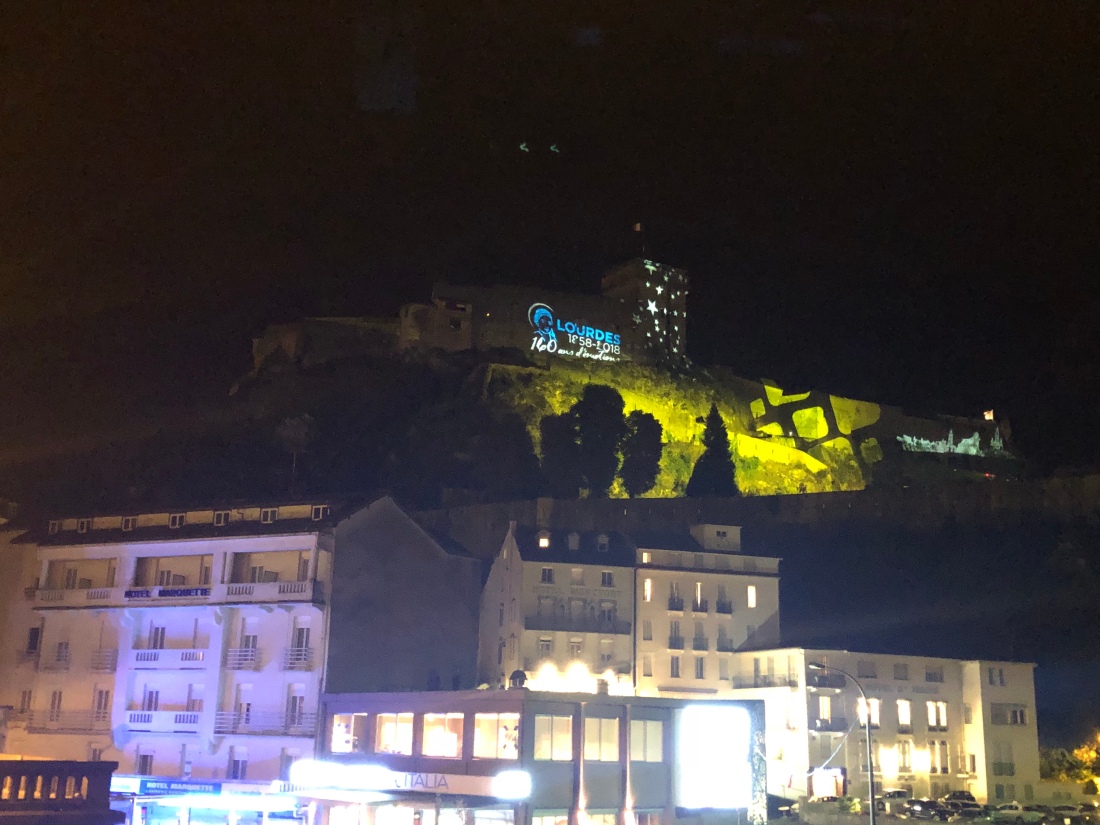 My time in Lourdes was more special than I had even hoped for. I hope to upload even more pictures to the gallery.