When last we spoke I had just left Lourdes, France and was on my way to Monaco. As a flight attendant, I’ve seen most of the world…..from the air. This trip, I wanted to see things from ground level. So I booked long train rides from city to city. I must say, it was a great idea and I’m loving every minute of it. Riding through the countryside of southern France was even better than expected. I even saw Flamingos!!! There is a protected area where a flock lives and I was lucky enough to catch them on a day that they were there. Unfortunately, the train was moving too fast to get a picture. I had a lovely seat mate who was on her way to a friend’s wedding in Lycee. When she boarded, I was taken aback by her dress and makeup at 8 in the morning. Then, she told me about the wedding, laughed, and said I don’t usually wear flowers in my hair in the morning! Haha! We had a nice chat, her English being better than my French. The trolley came by twice and both times I got an espresso. They brew it right on the cart!! I was amazed by the mountains of the French alps, not expecting them to be so high. I changed trains twice, in Toulouse and Marseille. The train that I picked up in Marseille was a regional and very crowded. It’s in the last picture in this first group. Then we’ll move on to my arrival in Monaco. 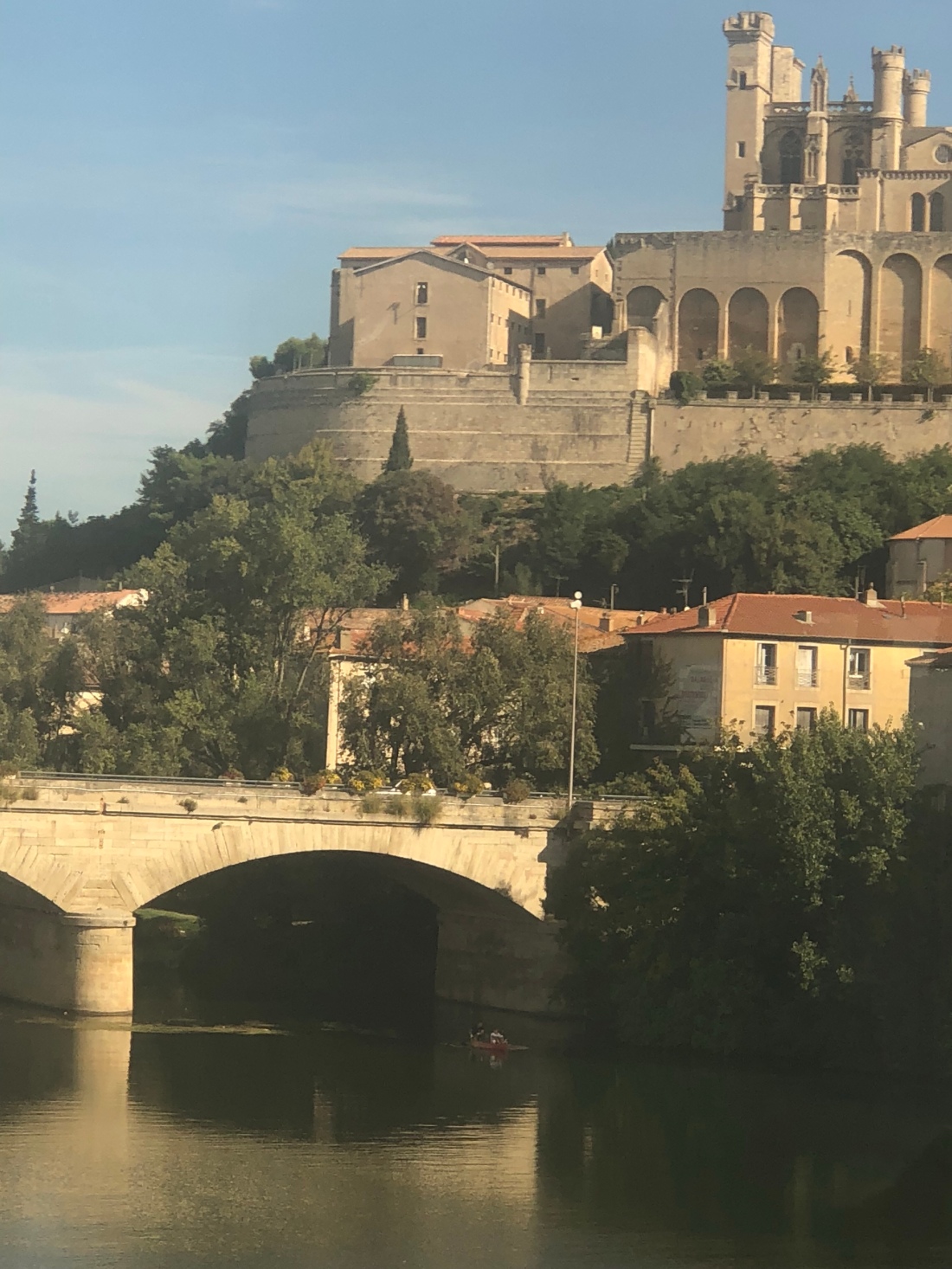 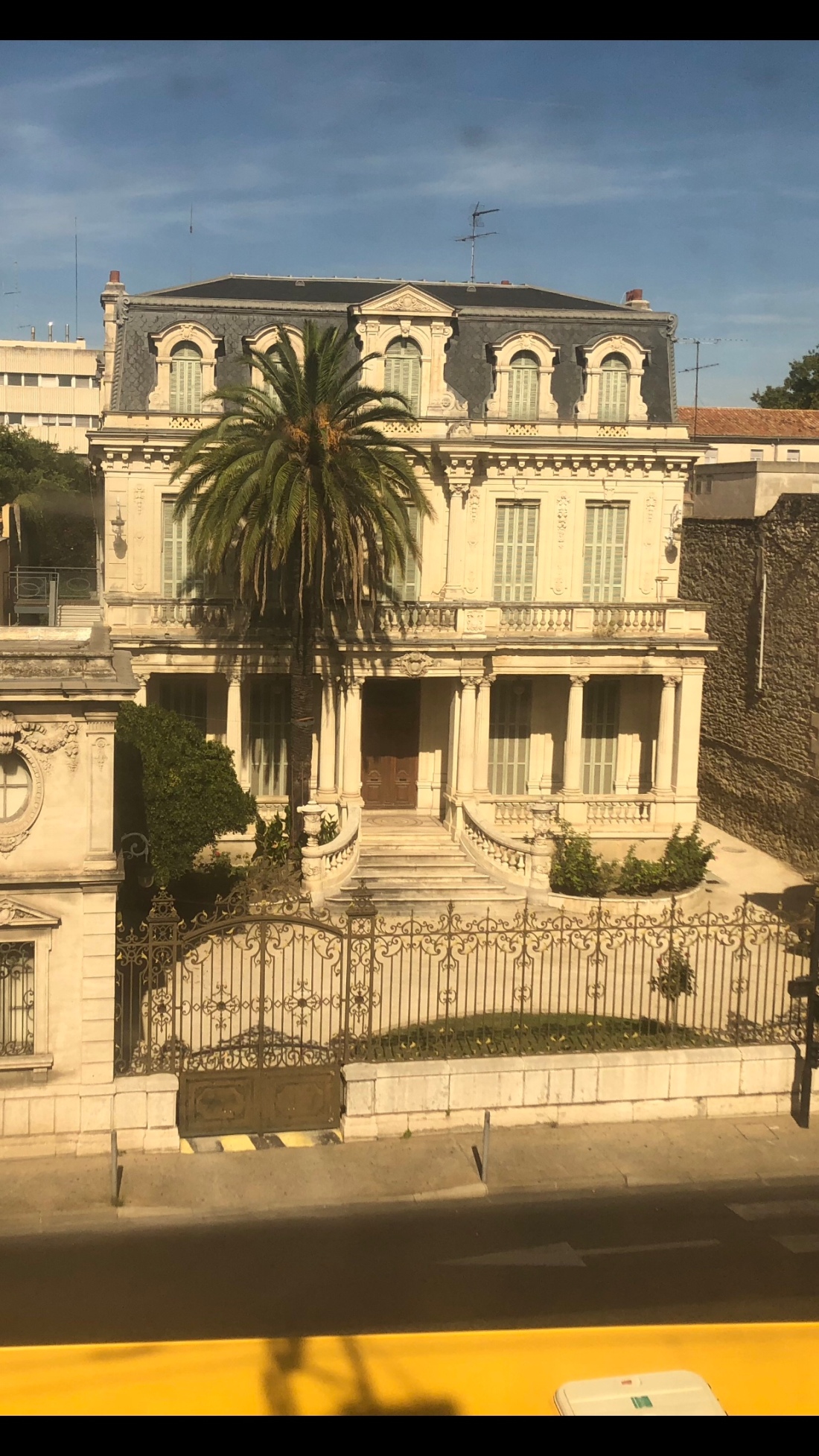 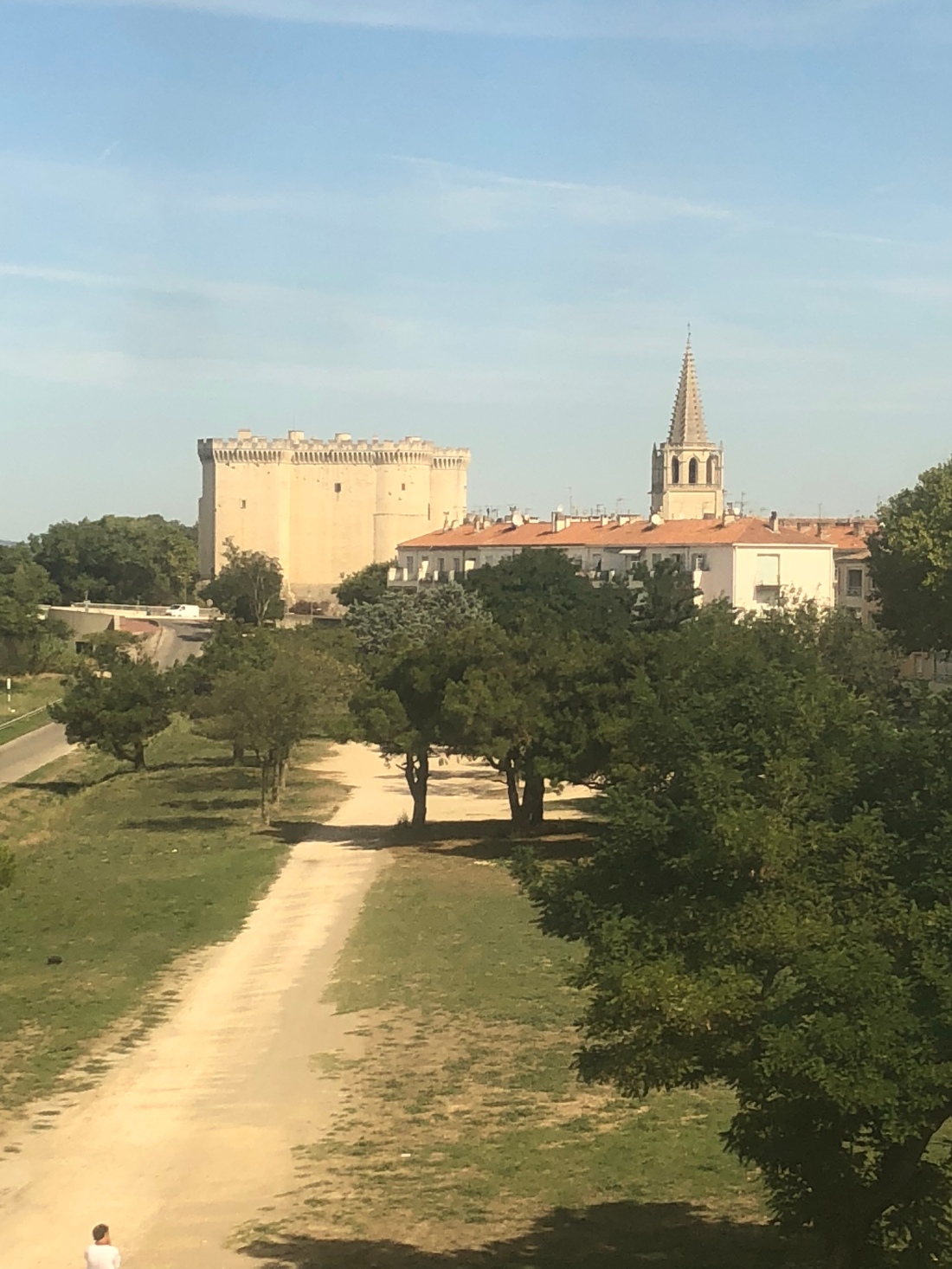 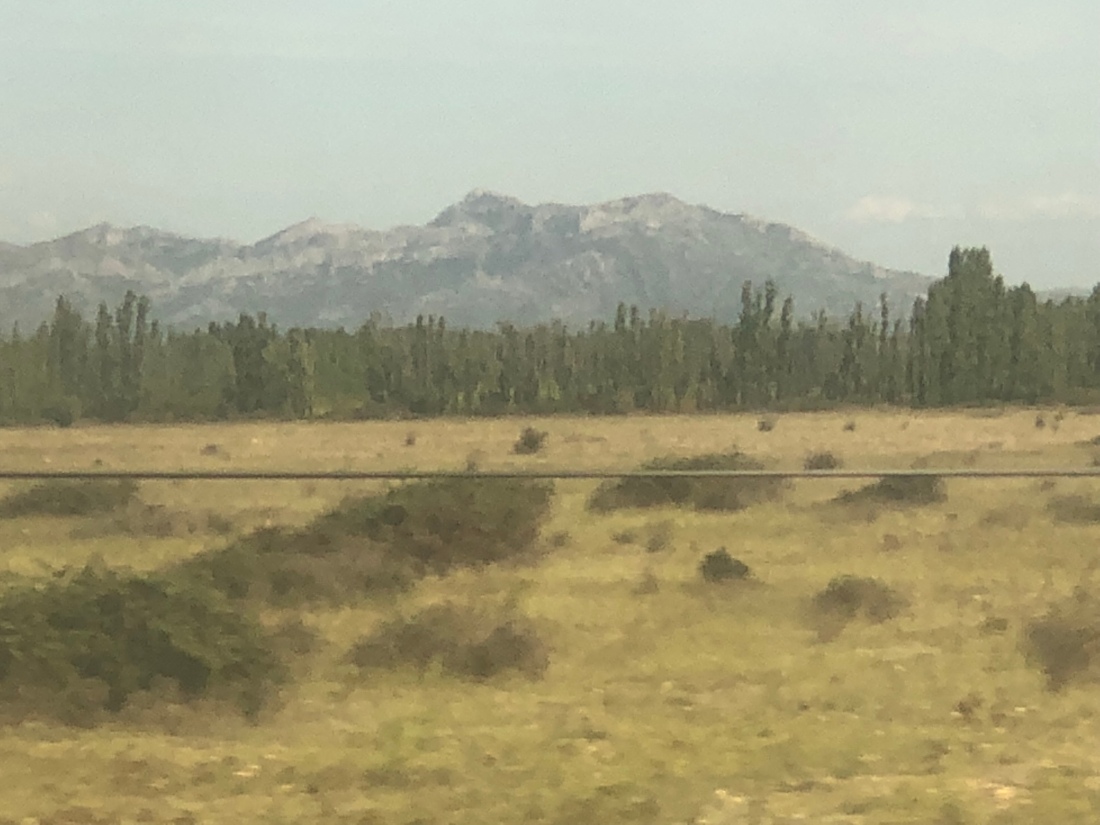 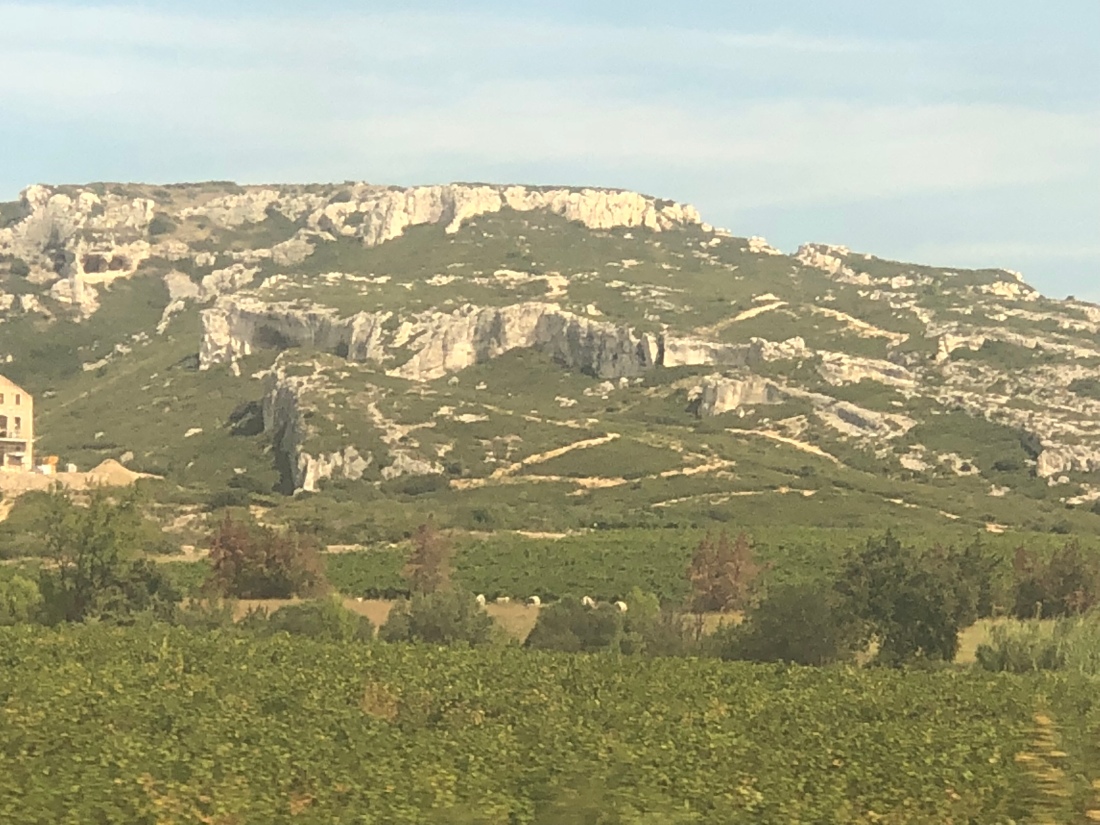 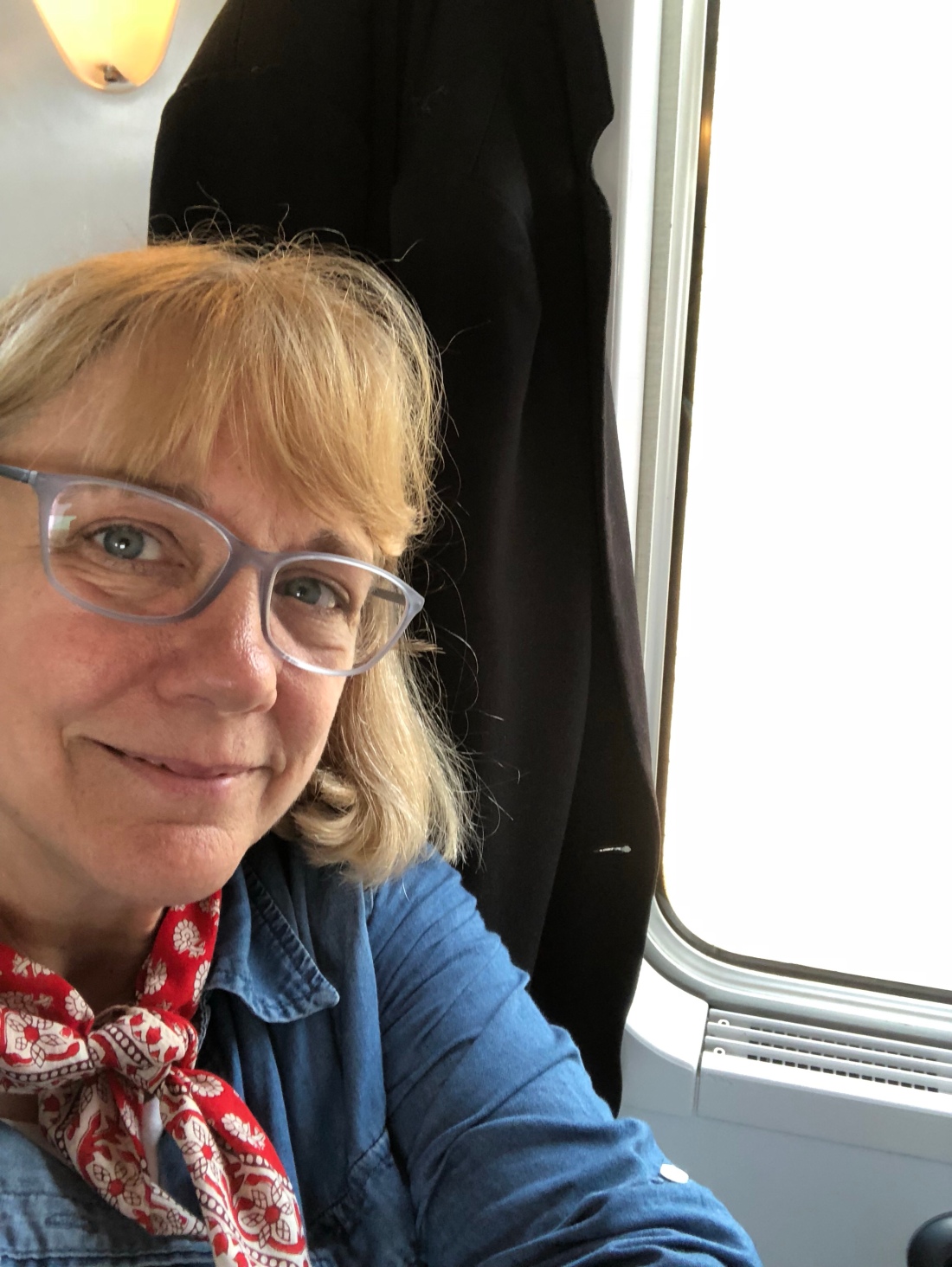 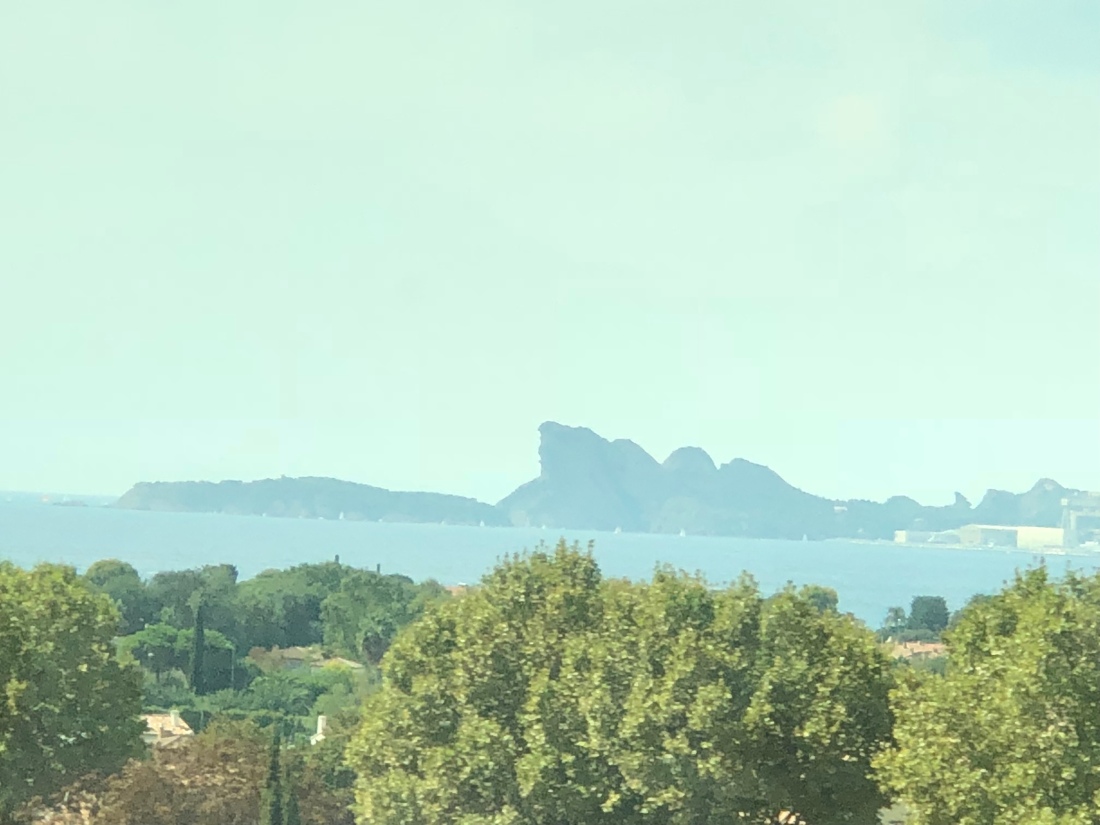 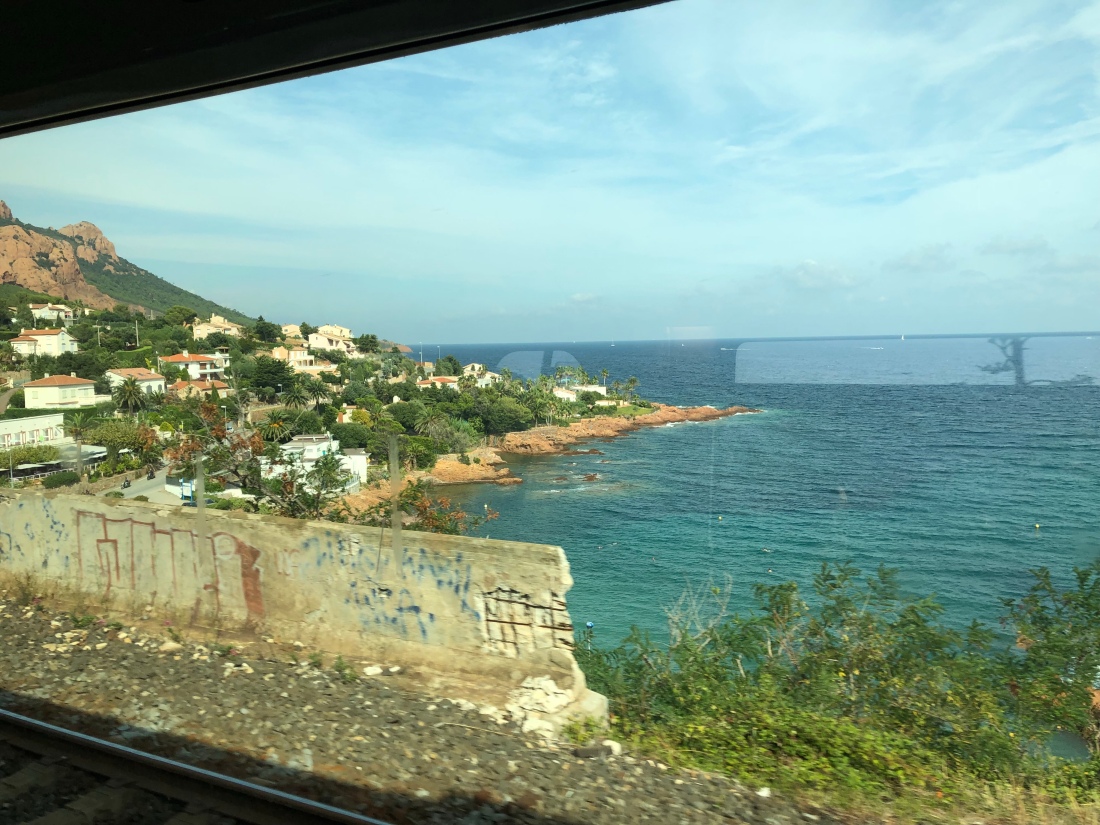 Riding through the French Riviera was a special treat! Every town we passed through I felt I already knew (from reading books where there was always some romance involved or the heroine was escaping to recover from a broken heart). There were several that I wish I could have stopped to see, maybe another trip.

After a long day on the train I arrived in Monaco. The train station was very nice and clean too. My Airbnb host had given me instructions on how to get into the marina where the boat that I would be staying on was moored. However, the tents for the upcoming boat show were being set up and I got a little lost , but only for a minute . We were to meet in front of the bronze statue of the Diver by the pool. I eventually found it and Tony. Tony, my host, couldn’t have been more wonderful. He had thought of everything. He was very attentive and had everything on the boat that one could possible need. I really wish I could have stayed there longer. The two nights that I stayed on the boat I was transported back to my childhood and slept like a baby. Everything about this stop, from the boats to the boat show to the marina reminded me of my father and I began to miss him terribly. For those who haven’t known me long, my father was a yacht broker over thirty years and when he had a boat show I would go with him a lot. It also brought a lot of nice memories.

The first night in Monaco, I went to a seafood restaurant right at the marina. The food was good and so was the location!

The next morning I tried to get moving early but, Monaco doesn’t rise early and neither did I. Once up , I set off in search of the Starbucks for the coveted “I’ve been there” mug. The one that I went to (there are two in Monte Carlo) was on a roof top and had the most amazing view!! Then, I realized I had left all my meds back at the boat! So, back to to the boat (after stopping at the souvenir shop by the Yacht club). So, I was able to drop off my purchases while picking up my meds…good thing.

After all that, I set off to be a tourist. On Sundays, the local buses are free and go the same places as the tour buses, so I took the number 1 to get to the palace and made it just in time to see the changing of the guard. The line was short so I bought a ticket to do the tour of the palace which I’m really glad I did as the paintings were gorgeous! The old city is so charming and I wandered the streets looking for a little place to have lunch. Found a little sandwich place, quite good. Following lunch, I went to the cathedral and Princess Grace’s tomb. The cathedral was magnificent .

I walked down through the exotic gardens to the Oceanographic museum , which was wonderful! For those who grew up watching Jacques Cousteau specials, this is the museum that he directed. I took a million pictures! Afterwards, I wandered down the mountain hoping to find a special place that my host had told me about…. and I did!!! It is a secluded beach that he said only locals know about. Of course you have to climb down very steep steps to get to it….. but, totally worth it!!! I made it down and put my feet in the Mediterranean!! It’s a pebble beach and my tender feet had a hard time walking but I lived ever second!! I even took 3 tiny pebbles.

Next up was stopping for a pizza before returning to the boat to get ready for my night out at the famous casino. The pizza was fabulous (pizza Marguerite) and I followed with an espresso to wake me up! I hurried back to the boat to shower and change into a long dress (yes,really) brought just for this night. No pics, as I was alone and somewhat intimidated by my surroundings. Anyway, I felt rather glamorous walking to the elevator at the yacht club, which take you up the mountain to the level the casino is. Unfortunately, my sugar went low and I had to stop for a coke. Gathered my wits for about 15 minutes and made my way towards the casino. All the while, I’m thinking “walk in like you own it”. My turn to intimidate 😉. Keep in mind, my knowledge of this place is only from James Bond movies, so I’m expecting diamonds and glitz and tuxedos and……………there was nobody there! It was only 9pm and, apparently, the place doesn’t get hopping until 11-12. I will say, it was extraordinarily beautiful. The paparazzi are stopped out front and snap pics continuously, to not miss anyone , I’m guessing, that they don’t recognize. The cars out front are lined up and of types you only hear about, but never see. The convertible Bentley seems very popular. I prefer the vintage sports cars that were riding around, and there were lots. One only has to see the streets of Monaco to understand why the Grand Prix is here/there. I played the slots for a little while and then went to find the roulette table. I’ve never played. But, I walked up with every intention of playing once. I watched……and left, just wasn’t interested. So, I walked around, still looking for James Bond. Didn’t see anyone even remotely dressed that well or that interesting. So,I went back outside to look for celebrities….,.nada. Took some pretty pictures and decided to head back to the boat. I walked around and ended up taking pictures of a lovely church that I found out this morning is where the locals prefer and where they like to have their weddings (as opposed to the cathedral). The remains of their patron saint are buried there. I went back to the boat and packed up for the next part of my vacation. In the morning, my host Tony took me to the train station along with his daughter whom he was taking to school. My visit to Monaco was a blast, loved it and so glad I got to see all the places that I did in such a short time.

Today, I’m making my way along the Italian Riviera and loving it. I see now why people love it. Maybe on my list for other trips.

edit: still unable to upload with pictures, hoping to edit them in later.

3 thoughts on “It’s all about the journey until you get there!”